One of the most common clichés you likely have heard is you can’t have your cake and eat it too. But can’t you?

In Regina, we are saying you can and Jared Lukomski, Senior Vice President with ROK Resources, is backing that claim.

ROK Resources, a publicly listed oil and gas company trading under ROK.V on the TSX Venture, is focused on resource-based value creation in quality light oil and gas assets in Alberta and Saskatchewan. Recently, it has made some big moves in the industry with a $72 million transformational acquisition of oil-weighted properties from Federated Cooperatives Limited (FCL).  All of this proudly being headquartered in Regina.

Lukomski said one of the biggest feelings he carries from this acquisition is his sense of pride.

“I think this transaction financially is really, really good for ROK and its shareholders, but the part that I’m most proud of is a handful of individuals were able to bring this together and create something in our own backyard,” he said. 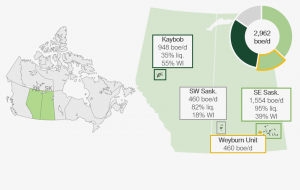 “A big piece of this asset is in Saskatchewan, but there is a great deal of value to untap in Alberta,” he said, adding this is a new area for them.

In addition to acquiring the asset, they grew ROK’s workforce from a handful of employees to 15 employees, and growing, and added offices in Calgary and Carlyle.

With such success, one could think it’s time to move the head office to another city, but Lukomski, who was raised within the same 10-block radius, has no plans to move.

“I am really excited to continue to be a part of this community and lean on the values that helped build me into the person you see today and move Regina forward where we can build on our communities success,” he said.

With over two thirds of ROK’s asset located in southeast Saskatchewan, Lukomski said there is a competitive advantage being just a few hours away for its closest well.

With low commute times, affordable housing averaging under $300,000 and an amazing sense of community, Lukomski said they hope to continue to bring talent to Regina.

“As ROK evolves our desire to attract talent to Saskatchewan continues to be a priority for us,” he said. “I’m hyper-focused on remaining in Regina and wanting to raise my family in that same 10 block radius and we’re going to build out our resources to allow for that.” 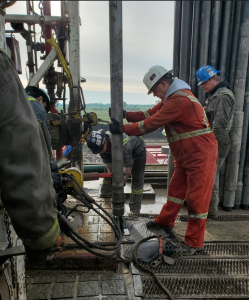 Looking to the federal goal to have net-zero carbon emissions by 2050, ROK is investing in other forms of energy.

“The anchor asset to our recent acquisition is the Weyburn Midale Unit. It’s a world-class asset …and a major step in ROK’s vision to be a sustainable and environmentally responsible operator by offsetting ~86% of its current CO2 emissions. We want to target becoming a net-negative CO2 emitter over the course of time.”

In addition, ROK operates and owns an interest in a private corporation, specifically Hub City Lithium Corp., who has 212,000 acres of Subsurface Dispositions which includes lithium rights.

“The energy landscape is changing, and the lithium piece will be a part of our energy solution,” he said.

As part of the process to get extract lithium ROK utilizes the oil and gas infrastructure and brings up the brine (which is otherwise waste), and with the help of technology, is able to separate the brine from actual lithium, which can get used for batteries and other pieces.

Lukomski said this is just the beginning of value creation.

“Very little time to celebrate, we have a solid asset base, but we need to remain focused on creating value for our shareholders, and we think Regina is a great community to be able to do that in,” he said.

He said this city can sometimes be overlooked, and unsuspecting for globally successfully businesses, but adds you can have it all in Regina.

“Why not us, why not here, why not now, why not this asset, why not do more,” he said. “I’m excited for where the future can take us.”